Pardon me for posting something not running, but apart from my apparent addiction to running, comes this sport named “tennis”. it’s something that I have always loved ever since I was a kid, and considered to be my life’s biggest frustration – on not making an effort to learn it.

Three (3) slams done this year, and it all boils down to the last, the US Open. i feel so disconnected as my cable TV at home does not have coverage of this open. well I guess good for me as if it did, I might end up being a zombie at work since most of them happen wee hours Philippine time. 🙂

the last tennis grand slam tournament for the year

My bets. I have always been a Maria Sharapova fan, for she is so pretty, and tall, and fit, and she endorses NIKE. But it seems that her career pattern has been broken this year (currently at World#17). She’s won a slam in every 2 years since 2004 when she won Wimbledon at age 17, but missed to fish one in 2010 after losing to Caroline Wozniaki in the 4th round in this tournament. Well, good luck Maria, you can try again next year!

On the women’s singles draw I am currently seeing the possibility that it will boil down to the US Open top seeds Caroline Wozniaki (Denmark, World #2) and Kim Clijsters (Belgium, World#3) having 3 titles each this year in the WTA tour. Of course the mighty Williams sister Venus is still alive, but I’m eyeing on the first 2 gals mentioned to take the slam. Secretly though, I’d like Kim to take it! 🙂 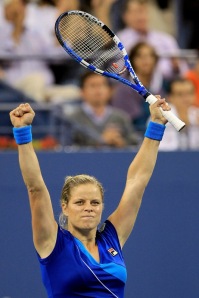 Kim earning a slot at the Semis

On the men’s singles draw, should I even bother to speak? I am a die hard RF (Roger Federer) fan from head to toes. Yes, he might have lowered his world ranking to #2 (behind Rafael Nadal of Spain), but that does not suffice to say it’s the end of his career with 16 grandslams. Boo to those who judge my Roger. 🙂 haha! Anyway, I know that there are still a lot of great players standing out there such as Rafa, Soderling, Novak, but I am very hopeful for another RF win! He’s up to play Sweden’s Robin Soderling next, and he knows it will be tough. Robin has beaten RF in the quarterfinals of French Open this year. My cheer: “Let’s go Roger, let’s go!”

Roger earning a slot at the US Open’s QF

Just a few days left before we reach the finals, and I am so hyped! It gives me the rush watching excerpts and clips of the matches, what more when I get to watch it live and from start to end. Aside from the marathon dream, it is also a dream to be able to watch a grand slam tournament LIVE and in PERSON! Would be major major great if its Wimbledon though..hehe *hopes up!*